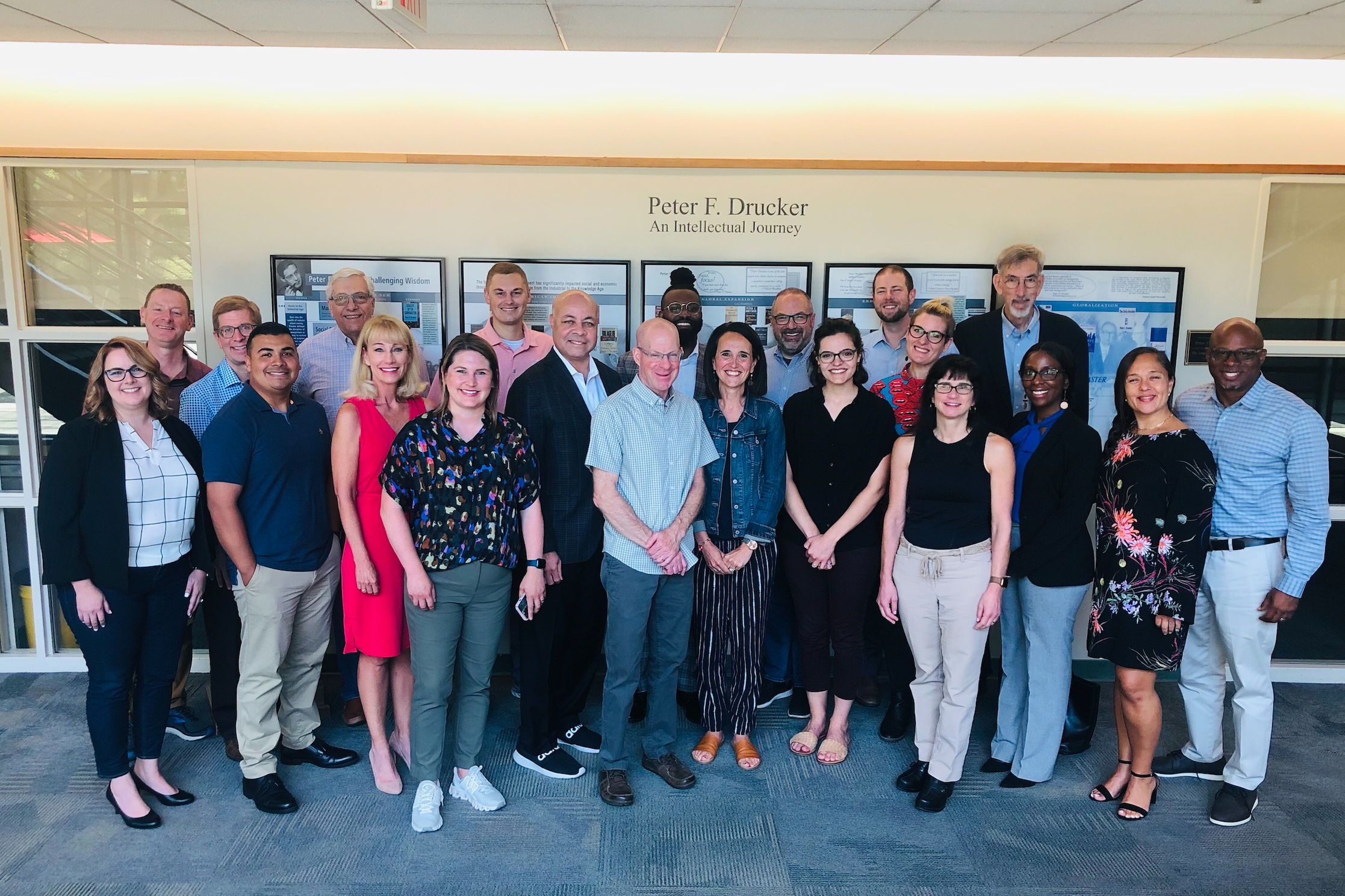 How local governments can cultivate authentic relationships in their community

Nearly 50 participants are seated in assigned groups and gathered in a community meeting room in South Bend, Indiana. On the screen, a virtual white board shows their responses to a pre-workshop activity. But all eyes are on the facilitator, Lawrence Greenspun, the Drucker Institute’s director of public sector strategy and planning. He’s introducing himself via a story laced with his usual self-deprecating humor about childhood memories of growing up near Philadelphia.

Lawrence’s workshop is built around three questions: What four things do you love in your neighborhood? What four things do you want to improve? And what would you like to see in your neighborhood 20 years into the future? More immediately, the workshop begins to weave a tapestry of connections, allies (sometimes unlikely ones) and a shared vision for the future of South Bend, and it helps participants recognize they all have a role to play in shaping that future. The 90-minute workshop often generated such spirited conversation that it could easily have been twice as long.

The insights from the workshop will be integrated into the South Bend 2045 Plan, a state-mandated 20-year comprehensive blueprint that will include strategies from thousands of interactions facilitated by Lawrence, along with a review of how best to coordinate and pay for these strategies under the advice of our team at Funkhouser & Associates.

The South Bend 2045 engagement began only earlier this year, but Lawrence’s relationship with the city goes back to 2011, when 29-year-old South Bend native Pete Buttigieg began his administration as mayor with a focus on investments in human capital and quality of life.

Lawrence called Buttigieg and offered to create a Drucker-inspired playbook for American cities with South Bend as the pioneer. The mayor’s right-hand person, Scott Ford, led the initiative with his 30-member Department of Community Investment. Lawrence joined the team. Two months later he unveiled a leadership and management training program to align the work of every employee, from the part-time assistant to the department director, via monthly sessions and the creation of the Drucker Playbook for the Public Sector.

Key elements of the Playbook include the premise that leadership has nothing to do with job title, salary or position. Leadership has everything to do with one’s effectiveness. Every person in a local government, from the person filling the potholes to the person engineering the streets to the person who designs the entire vision of how the city is laid out, is in the same training so the teams are aligned in terms of focus, language, understanding, mission and who the customer is. The Playbook, therefore, is for everyone.

Another key feature is the Playbook’s bias for practical implementation. It takes insights from the management visionary Peter Drucker’s writings, such as the concept of “planned abandonment”: You cannot do something new until you stop doing something old. The Playbook provides a tool for identifying old programs, services and policies that haven’t been producing results and abandoning them, and it helps participants figure out the new things their city could do to focus on the mission and achieve better outcomes.

Since the creation of the Playbook, Lawrence has trained some 5,000 local government officials across the United States. The program also has gone global, with leadership training at the Reserve Bank of India and presentations in Brazil and Japan.

Lawrence’s deep connection to those he has taught and mentored has roots in his upbringing. His father was a physician and his mother was a fierce advocate for social justice. They would open up their home to help recent immigrants until proper housing was found.

Like his parents, Lawrence is a “relentless defender, with a great sense of humor, and smart,” said Rick Wartzman, founding chief executive of the Drucker Institute and now head of its KH Moon Center for a Functioning Society. Wartzman and Lawrence met when they were both kids at a Jewish educational summer camp. “He in so many ways is the same kid I met at 9 or 10 years old, he just knows more stuff now because he’s older,” Wartzman said. “There’s a lot of smart people out there, but the people who put their team first are kind, are in it for the right reasons, have good values and are dependable — that’s Lawrence.”

Mike Sable, who hired Lawrence to train his team using the Drucker Playbook when Sable was director of facility services for Hennepin County, Minnesota, said Lawrence has a unique ability to tie themes together and then outline a practical approach. “He’s able to synthesize and link together three or four or five things that you didn’t think of and tell a story that encapsulates where it all comes together,” said Sable, who is now the assistant city manager of Bloomington, Minnesota. “And he doesn’t just end with that. There is always that thing to do next.”

The kind of work Lawrence does, from creating the Playbook to providing leadership training to thousands of local government employees, is crucial to localities struggling to cultivate community, employee engagement and trust. Collaborating with Lawrence has also been illuminating for our team at F&A: the power of connections and trusted relationships is core to our work helping localities with governance and fiscal sustainability issues.

How do you create and nurture these kinds of connections and relationships across a complex enterprise? “The way you do it at scale is to not try to do it at scale,” Lawrence said. “It’s to start with human beings and humanity and get two people who might not normally sit down together to sit down together. We can get them talking and point out to them the next day that you realize they are both trying to accomplish the same thing.”

Of course, there will be disagreements on how to accomplish that goal, Lawrence added, so the next step is to identify “how to use each other’s strengths and use the connection to the community and access to resources. We are both trying to get to the same place, so let’s have the two of you have lunch and figure this out. And from those two people having lunch, maybe good things will happen.”

The Funkhouser & Associates team is grateful to have Lawrence Greenspun as a partner in making good things happen in local government and to share his stories and insights with our clients. Nowhere are the kinds of connections and relationships he advocates more important than in local government.