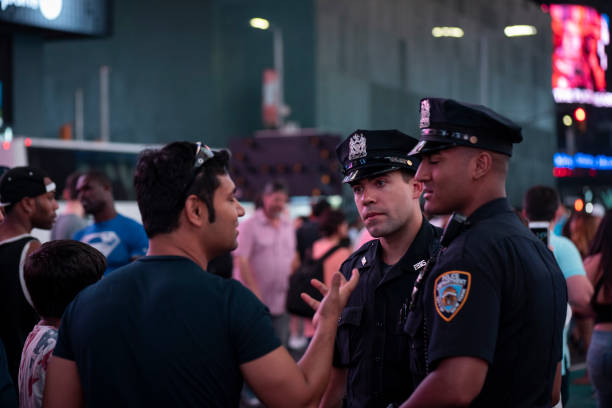 The North Star of Public Safety: Communities and Cops Working Together

A resurgence of violent crime during the pandemic has magnified the intense focus on law enforcement sparked in May 2020 by the murder of Geoge Floyd. Rates of murder, aggravated assault and other violent crimes have been on the rise, propelled by firearm prevalence, socioeconomic instability and disruptions to community life.

In my conversations with leaders across the country, they point to the same public-safety challenges I remember as mayor of Kansas City: Crime disproportionately affects poor and historically disadvantaged neighborhoods, and murder clearance rates are at historic lows. Meanwhile, the militarization of police and the impacts of police violence further erode trust between neighbors and cops. On the police side, morale is low and many departments are critically understaffed, even with increased pay and training.

Taken together, these challenges seem overwhelmingly complex. But the solutions don’t have to be. I believe a much simpler approach to public safety has the potential to rebuild trust and reduce crime: Create collaborative partnerships between the police and community residents.

The concept was articulated formally in the early 19th century by Sir Robert Peel, who is considered the father of modern policing and later served as Britain’s prime minister. Peel’s Nine Policing Principles argue that preventing crime requires public support. An integrated relationship between community and police, he wrote, means “that the police are the public and the public are the police”; the only difference is that police are “members of the public who are paid to give full-time attention to duties which are incumbent on every citizen in the interests of community welfare.”

In this country, former Boston, New York City and Los Angeles police chief William Bratton embraces and advocates Peel’s Principles. “Smart reform starts with winning trust from two different groups,” he wrote in The Atlantic in July. “First: neighborhoods. You want to serve local communities … but you don’t want to over-police and foster a sense of officers as an occupying army.” The other group is the cops, who, Bratton wrote, “tend to cocoon themselves, becoming isolated from the communities they serve.” A low work ethic and “curdled cynicism” result in a department “in which abusive and violent individual officers thrive.”

I recently spoke with several other thoughtful practitioners about how they have used these principles, and the insights they shared are useful for leaders everywhere:

Ganesha Martin is a global expert on police reform and accountability. She had a long career in public service in Texas and Washington, D.C., before becoming Baltimore’s assistant deputy mayor, where she oversaw six agencies including law enforcement, then became chief of staff to the police commissioner. She is laser-focused on the relationship between communities and their police departments. She created Baltimore’s Bureau of Community Engagement, noting at the time that “the only way we are going to have sustainable change in Baltimore City is by taking into consideration the human beings that are a part of the system.”

Today, Martin shares her expertise with public agencies, emphasizing that the ultimate control and decisions about policing must be in the hands of residents. “It is critical that the residents and police department are connected,” she recently told me. “If that’s not right, then nothing is right. These are the two wings that the plane needs to fly.”

In the face of union resistance, Cleveland Mayor Justin Bibb is determined to lead the way for community oversight of the police in his city. “Cleveland is the only city in America that has been investigated by the [U.S.] Department of Justice twice for policing,” he told me, “and has long served as a case study for the nation on the need for police reform.”

In last year’s elections, Bibb was the only mayoral candidate to endorse Issue 24, an initiative prescribing police oversight and disciplinary processes. Overwhelmingly approved by the voters, it established one of the country’s strongest civilian oversight bodies, with subpoena power and a $1 million in funding. The Cleveland Community Police Commission’s mission, “to provide community input on police policies to help strengthen relationships between officers and the communities they serve,” is exactly the vision needed to move communities forward.

A former Army Airborne Ranger with a degree in psychology, Marcel Brunel works with police agencies across Texas. He counsels leaders to train police to be “hard on the problem and respectful to the people.” Many departments “are in big trouble,” he told me. “They need to work on a culture shift to get the police officers to identify as part of the community, not part of a police-department tribe.”

In Norfolk, Va., Interim Police Chief and Deputy City Manager Michael Goldsmith said his brief time in Europe as a law-enforcement subject-matter expert for NATO informs his current work. Norfolk has seen a significant uptick in crime at the same time as police-department vacancies have increased. Goldsmith, who began his public service career as a Norfolk police officer, focuses on the need for empowering police to make collaborative decisions. Working to make sure his department stays healthy internally includes using technology as a force multiplier and trying to create a department where everyone is a recruiter because they are happy to come to work.

The partnerships between resident and police agencies these thought leaders describe are the best investment of resources for mayors and police chiefs. Along with citizen oversight, their lessons include restructuring agencies to elevate public-affairs and community-policing staff to executive status; establishing data-driven accountability for chiefs and commanders; and allocating real dollars for neighborhood patrols embedded with nonprofits and community organizations that focus on prevention, not just response. Informal activities include time assigned to officers to attend community and business meetings, engage with neighborhood associations and become involved with youth-led activities.

I believe a collaborative relationship between the police and the residents they serve is the North Star for safer communities. While city charters give the police the responsibility for public safety, officers can only protect their communities with the collaboration of their residents. We see promising work in places like Baltimore and Cleveland. We have mentors like William Bratton, Ganesha Martin, Marcel Brunel and Michael Goldsmith. We just need the courage to follow the path they have laid, with neighbors and police as partners.